Make your production even more engaging!

GlobeCaster ACE Seat License turns any PC into an offline or online graphics creation station for titles, slates and more. Save your projects in popular formats and use them in any Editor or Switcher on the market including BlackMagic Designs ATEM Switcher and Adobe Premiere edit stations. 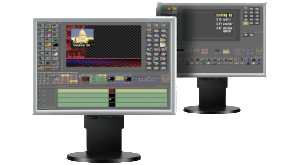 The GlobeCaster ACE Seat License, a suite of our animation/compositing, titling, and effects generation software, saves GlobeCaster users time and money by dividing production in an innovative way.

Withthe ACE Seat License, an additional computer can be connected to the GlobeCaster Host PC via an Ethernet network so animation, paint, effects and titling can be created offline and dropped into GlobeCaster bins ready for broadcast. This modularized production empowers one person to create and load graphics, titles, and effects while another operates the GlobeCaster. This is a simple way to have a dedicated CG operator and more.

GlobeCaster ACE Seat License – another time and money saving innovation from GlobalStreams that adds the power of flexibility to your broadcast communications. The ACE Seat License works with most PCs and laptops running Windows XP, Windows 7,8, or 10 (32 bit). An available USB or parallel port is required for usage.